Sega Megadrive, unlike the SNES, does not know how to enlarge the image at the level of iron. However, using interrupts, you can stretch the picture, or vice versa to compress. To understand how it works, you need to understand how the image was drawn on TVs before.

How images are drawn on old TVs.

Old TVs used a kinescope (cathode ray tube), inside of which, an electron gun, fires an electric beam at the phosphor, which lights up, thereby illuminating the pixel on the screen.

Next, this beam passes through all the pixels, drawing pixels, line by line. And, as soon as the beam has drawn the screen, it returns to the starting position, and repeats the process. This is how the image is drawn.

There are time intervals HBLANK and VBLANK:

VLANK time is longer than HBLANK, due to the difference in distance.

You can move the plain (layer) in HBLANK time, yes, right during the render. If you scroll through the plain, during rendering, you can stretch it or vice versa, compress image.

As the basis of the SGDK project, I took the project from SGDK. Create an image.

Open main.c and replace the main function with following:

Everything else, I said in SGDK. Fade-in and Fade-out transitions, as well as in SGDK. Layer, tile, line.

Now, add the following lines somewhere at the beginning of the script:

I explained all the code in the comments. Now, run.

As you can see, the picture is compressed, and turned over.

The picture flipped because we moving the plain up.

v_offset – will go minus.

Thus, the current line goes down, and the plain goes up, so you get an inverted image.

Let’s complicate the example by adding the improved HIntHandler and VIntHandler functions.

Again, the explanation in the comments.

You can see that the lower the image, the smaller it is. What they wrote, they got.

Horizontal interrupts allow you to achieve beautiful effects on the Sega Megadrive, which can not but rejoice. Also, in the folder C/SGDK/sample/fxh-int, there are 2 examples (from which I learned) scaling and wobble. Having studied which, you will be able to better understand this topic. 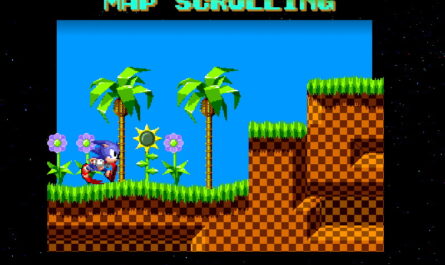 SGDK. Move around the map.